Available via phone or website only / Delivery or Curbside Pickup Offered
All orders from this website come directly to our shop…no middleman! We are a REAL florist!
You can place your order with confidence that you’ll get what you pay for…and more! 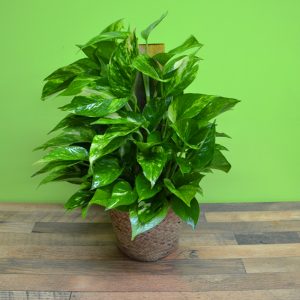 Golden Pothos (Scindapsus aureus) plants are among the most popular houseplants for their versatility and easy care. Golden Pothos have a yellow and green variegation which make them easily recognizable and popular in a variety of settings. Also known as Devil’s Ivy, Golden Pothos is naturally found in forests from Southeast Asia to the West Pacific. Typically a fast-growing strong climber, Golden Pothos can flourish as houseplants or climbers, indoor and outdoor, in full sun or partial shade, and requires little watering.

Golden Pothos is a very versatile plant that can tolerate the lower light levels or bright filtered light of a home while also thriving in the full sun of a yard or grown outdoors in tropical states such as Florida. Indoor Golden Pothos require bright filtered light during most of the year. The yellow variegations of the plant become more pronounced when exposed to greater amounts of light. Outdoor plants can tolerate full sun to partial shade such as would be found when grown through trees, against a wall, or over a pergola.

The soil around Golden Pothos should be kept relatively moist but take care not to over water. Golden Pothos have a shallow root system which means that less actually is more when watering as less water is needed to saturate the soil down to the lowest roots. Golden Pothos will perform best when watered freely during the growing season. However, try not to soak the soil but instead water lightly around the pot. Reduce the frequency and amount of water to light or moderate watering in winter.

Golden Pothos is a very stable houseplant so applying a balanced (20-20-20) fertilizer monthly will suffice. Use a soil-based potting mix when potting indoors. When growing outdoors, grow in fertile and moist but well drained soil in full light to partial shade.

Golden Pothos plants are susceptible to pest and pathogen problems. Typical pests affecting Golden Pothos include mealybugs, spider mites, and scale insects. Mealybugs are typically the most common of these and can be removed using alcohol and a cotton swab, an insecticidal soap, or removed by hand.

Golden Pothos are commonly grown by leaf-eye cuttings. Golden Pothos may also be propagated by root leaf-bud or stem tip cuttings with bottom heat during the summer. Air layering is also an option during the summer or spring. Potted plants held in a six to eight inch pot can contain as many as 35 cuttings with each cutting producing a new plant so maintaining a healthy plant is essential! Provide a moss pole for support when growing a Golden Pothos plant as a climber.

Prune Golden Pothos plants during the year. Being selective and trimming vines down to two inches from the soil line will make the plant appear fuller.