All orders from this website come directly to our shop…no middleman! We are a REAL florist!
You can place your order with confidence that you’ll get what you pay for…and more! 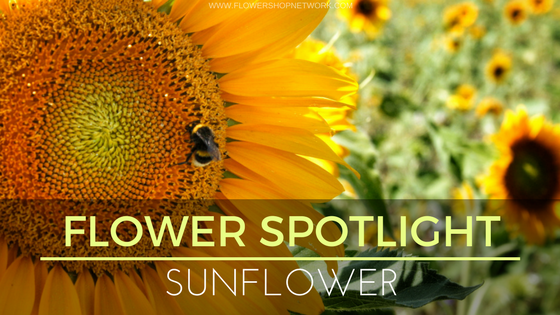 The sunflower isn’t unusual. It’s normally not a flower that people go bonkers over trying to get. It’s actually quite common, and some may wonder how it even finds its way from the field into arrangements. Those who overlook its beauty don’t realize that they are missing out on a pretty awesome flower!

Sunflowers are native to North America and were cultivated by Native Americans as far back as 3000 BCE. By the 1500’s, the sunflower had made its way to Europe and was grown as an ornamental, before becoming popular for its oil. Russian farmers were the first to commercially grow sunflowers and hybridized them to create varieties with the potential to produce larger amounts of oil and seeds. These Russian hybrids gradually made their way back to the United States where commercial sunflower production took off and still remains today.

The scientific name for the sunflower is Helianthus. It is derived from the Greek words helios, which means sun and anthos, which means flower. It often symbolizes pure thoughts, pure love, longevity, pride, loyalty, and happiness. The sunflower has also become a symbol of worship and faithfulness in some religions.

The sunflower became the state flower of Kansas in 1903.
In the United States, North Dakota and South Dakota are the top producers for commercially grown sunflowers.
Sunflowers come in more colors than just yellow! They can be found in reds, oranges, browns, and even bi-colored.
The Guinness World Record for Tallest Sunflower is 30 feet 1 inch and was set in 2014 by Hans-Peter Schiffer of Germany!
Sunflowers have many different uses, including cut flowers, edible seeds and oil, and dye.
Young sunflowers will track the sun during the day and turn as it moves across the sky. This is called heliotropism.

Sunflowers bloom naturally in the late summer and can be found year round at the House of Flowers.